Dear friends and followers, from now on and forward our link with uppdates and news will be published on the website of our main sponsor www.paxton.se
Posted by Ulf Brändström at 18.4.12 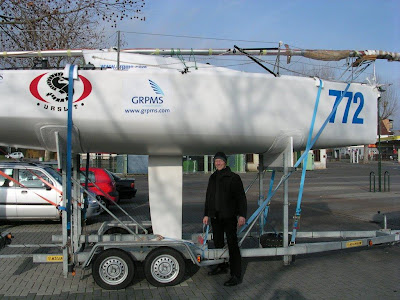 Frank Eckard bought SWE772 and towed her the 1600km to Berlin where he lives. As I understand he will keep the boat in Germany up to the spring when he takes it back to Lorient in France. It will be intressting to follow Frank in his campain and I will post a link to his future blog when I know it.
Hopefully I will sail Demi Cle with him as a co-skipper.
Posted by Ulf Brändström at 5.1.12

Time has come to move on. 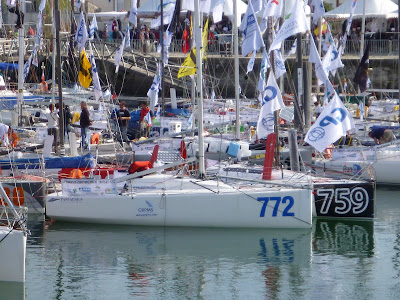 After 3 wonderful years in the Mini class it has now come to move on. The boat is most likely
sold and will be delivered to the new owner in Germany. I will probably still do
at least one race on the French mini seen as a co skipper during 2012.
So whats next?

If things goes well I will be sailing a Pacer27 Sport in Sweden. Bruce Gaily
and Björn Freels who I raced against
during the last two years in France will join me for some great blasting in local
Swedish races as Åf Gotland runt. We
will also add another 2-3 people to the future “Mojo” team
Moore news comming soon……..
Posted by Ulf Brändström at 15.12.11 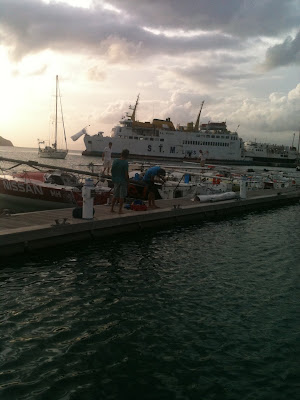 Victims of the ocean

I was unfortunately forced to withdraw from the race in Cape Verde due to a severe knee infection which has spread into my bone, three doctors, unanimously, informed me of the high risk of blood-poisoning and other possible complications if I carried on.
The start of the second leg went well and I was just where I wanted to be on the evening of the 13th of October, things started to change during the 14th when my starboard lower rudder fitting broke. I decided not to go into the Canaries , as I thought i had made an sufficient repair. After the temporary repair I knew that I could not push the boat as hard as I wanted to. My aim to start with was to qualify next was to be able to finish the race. The result was never so important.
During the night between the 14th and the 15th of October my left knee started to grow at an alarming rate so I decided to start with an antibiotic I had onboard (Anoxillum). At the same time I totally lost my appetite. I was starting to fall behind now, 29th place, I pulled myself together and decided to started to push more, despite my rudder problems, on the 19th. 10 hours later I heard a big bang from my port rear and I quickly realized that my port lower rudder fitting had exploded. I was 93Nm from Cape Verde and decided to divert into Mindelo. The progress was very slow with just one rudder working and as the waves were hitting me at starboard rear where my previously repaired rudder was. My previously repaired starboard rudder finally gave in 42 Nm north east of Cape Verde and I was left with no rudders. I tried to lash my oar to the stern without success. This left me with no other choices than to call upon a support boat for assistance. A hard decision but the only thing I could do to save the boat.
In Mindelo I quickly started repairing the rudder fittings, with a big portion of luck they may have lasted to Bahia. As the infection in my leg did not want to go down and the fact that I suspected that I had a fever I asked for a medical opinion from the doctor. The first doctor said my illness was very serious so I took a second opinion and contacted another doctor who subscribed me another type of antibiotics. One of the race doctors onboard one of the support boats had heard about my leg and came over for an inspection. She harshly informed me about the high risk of blood-poisoning and strongly advised me not to stay in the race. Three doctors, independent of each other, advised me to withdraw from the race and I respected their advice and withdrew from the race.

I have to say that these 2 years of challenge has been the most fun thing I ever done. It has really been an epic journey which should have been impossible without the sponsors; Grpms, Ursuit and Pateneius insurance.

If the occasion was to occur that I would have the possibility to do this over again I would jump at it any minute. So if you are a possible partner out there please let me know urgently and I am sure that we together can accomplish great things during the next two years.
Posted by Ulf Brändström at 26.10.11

Photo: Pierrick Garenne/GPO
Congratulations Ulf! You've finished the first leg of Mini Transat 2011! We are proud of you! 26th of 45 in the series class is not bad in tough competition. How was it?
Posted by Ulf Brändström at 5.10.11

Ulf seems to be sailing really well and is now positioned 22 out of 45 in the series class with 324 nautical miles left to Madeira. Check out the tracker and Go Ulf!!!
Posted by Ulf Brändström at 3.10.11